The BiSexual Man. Is He for Real or Just a Guy Hiding Behind a Mask? 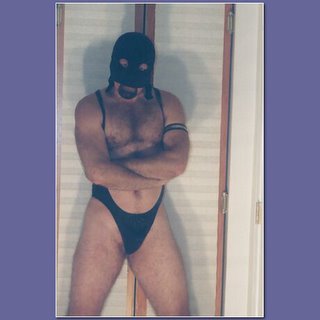 Being Halloween weekend, I thought this subject might be appropriate.

The Kinsey Institue at Indiana University has recently revisited this subject. This is in light of a study published last year raising speculation that there may not be a true bisexual male. That study has led to a lively and open debate on whether the bisexual male really exists. The Kinsey Institute is sheding more light now on the subject.

For the study, a team of psychologists from Northwestern U. and the U. of Toronto examined 101 men, 30 heterosexual, 33 bisexual and 38 homosexual. These guys rated themselves on the seven-point Kinsey Sexual Attraction Scale, hetero score from zero to one, bisexuals from 2 to 4 and queer scoring 5 to 6.

If the men became genitally aroused, mercury-in-rubber guages worn around the mid-shafts of their penises like rubber bands would measure increased penile circumference. The men also had levers to indicate when they felt subjectively aroused.

Gay men registered as expected, so did heteros. But those identified as bi, the results showed that these guys were bimodal, meaning aroused by men or women, but not both. About 75 percent of these so called bi guys tested showed arousal patterns identified to those of gay men.

Some guys such as Eric Demporio, feel that they are truly bisexual and have sought out support groups for bisexual men. He says that arousal isn't the only thing thing that defiens a person's sexuality.

Critics say that the entire bisexual population cannot be represented by 33 sampled men. While studies like this are flawed, they do lend support to the theory that bisexuality may not be just a phase, but something to hide behind.

An associate at Kinsey feels that the Kinsey scale is not being truly represented. He says that a guy can measure his sexuality on the scale based on either physical arousal or emotiona connections, which can be different. He also states that a person's physical arousal to a movie might not be indicative of a person's real life arousal responses. Again it all depends on the movie. If it involves S&M, some guys are turned on, others may be turned off. It's a matter of choice. He also said that it is possible that bisexual men didn't get aroused to the films involving two women becuase there weren't any men in the films to relate to.

One of the Northwestern U's authors, Gerulf Rieger, says that for some of the men in the study, bisexuality might have been a trasnsition phase. A similiar study in 1994 concluded that 40 percent of gay men surveyed said they defined themselves as bi before finally admiting that they were gay.

Rieger says the conclusions of the study was not intended to be proof of the nonexistence of bisexuality.

Everyone who studies bisexuality agrees that more research should be done. By simply talking to guys about thier sexualities is the one guaranteed way to understand different sexual identities. While that may be true, there is always the tendency to lie. Maybe when we as gay men are truly accepted as equals in our society that the truth can finally be revealed.

I continue to believe that bisexuality is a cop out. I never had the notion that I could be a bisexual. I have always been a gay man and one who has learned to be proud of who he is.

I do agree that for some men, even if they both claim to have the same sexual orientation, that doesn't necessarily mean that they feel the same. There are degrees. Some gay men are more effeminate, while others are super charged raw, rugged men who just crave for m4m sex. The measurement of how we feel is all over the rainbow spectrum.

So whatever you dress up as for Halloween, drag, vampy, in uniform, leather, whatever, enjoy it and just be yourself. In my book, you are all woofy men. Big hairy muscle hugs, and this is no Trick or Treat.
Posted by buff at 7:39 AM 9 comments:

Was Mr. Sulu of StarTrek Fame Gay All Along or Was He Just Played That Way?

The actor, George Takei, Mr. Sulu of Star Trek fame has come out as a gay man. Don't know if this is a surprise to anyone.

The 68 year old actor considers himself having been out for quite some time. He and his partner, Brad Altman, have been together 18 years. I wonder if Dr. Spock or Captain Kirk ever suspected this.

Mr. Takei came out to the Associated Press while being interviewed for his onstage role of psychologist Martin Dysart in "Equus" in Los Angeles. This interview corresponded with the gay rag's, Frontiers magazine featuring a storing on Takei coming out.

He had lived in a Japanese-American internment camp in California from age 4 to 8. He had felt, as a young man, shameful ahout both his ethniciity and his sexuality.

So yet another actor who is widely known for a role has come out of the closet. Whether this will continue will be anyone's guess. The more the closet opens, the more we as gay men can live our lives normally and equally. Acts like this show straights that yes, we are everywhere.
Posted by buff at 6:03 AM 2 comments:

Some Gay Flicks about Cops, Cowboys and Athletes to Watch Out For

Val Kilmer stars as a gay detective in "Kiss, Kiss, Bang Bang." From the reviews I've read so far, he comes off being gay believable. Sure hope this jump starts his career.

Also steamy on the screen are Heath Ledger and Jake Gyllenhaal in "Brokeback Mountain". I read the short story on which this flick is based several years ago, and it is stunning. These guys really do love each other and show it under the open Western sky.

Also there is a German import called "Guys and Balls" which features a gay soccer player who is outed and then with the help of his sister, forms a new team. There is love making among the two star soccer players of the new team, that really kicks ass both on and off the field.

So look out for these flicks coming to theaters and DVD next year. Seems that Hollywood and beyond wants to entertain us. If we support these films, more will follow. And I am all for that. WOOF.
Posted by buff at 5:06 AM 3 comments:

I came across, today, an interesting article by Lawrence D Mass. M.D.

Since that time, the cases have only increased and I want to shed some light on Dr. Mass's findings.

Th evillian is the Human Papiloma Virus (HPV) which is of the same family of viruses highly associated with cervix cancer in women.

My old buddy, and I use that term loosely, Woody Miller who writes, Need Wood? brings up an interesting point that I would like to explore.

I am sure all of you have had one night stands that when you were led into his bedroom, you almost barfed. The place was cruddy. The sheets weren't changed in ages, and everything was scattered everywhere. Here's a signal guys, that this might not be Mr. Right.

While we can't always be Mr. Clean, we can make the right impression. Clean sheets, a bed that is made, clothes hung in the closet, makes for a great first impression. You want to make him feel special, and your bedroom got to exhibit that.

I like leather sheets and pillow cases. I also like flannel. I change them weekly so when I ask a guy over, he feels well treated and is looking forward to having some fun. First off, we both head into the bathroom and take a shower together. Rub a dub is a great way of getting clean and making foreplay. Toweling him off is another way to make the night magical. If you are lucky enough to have a soaking tub, that too can become a great way to unwind and get him hard and soapy all at the same time.

So this one time, I do agree with Woody. If you want to impress your guy, get your bedroom in order. Clean the night stand, have everything you need readily nearby, and make him feel like he's never felt before. Hell, you can always get a good night's sleep. But good all night sex is what can make you fall in love with him this time or all over again.
Posted by buff at 12:51 PM 5 comments:

So Many Tomatoes, So Little Time

I've been busy with the fall harvest this past weekend. I grew several dozen tomato plants during the year and now with cooler weather approaching, they all seem to be bearing their final tomatoes.

I know, what's a gay guy to do with bushels of tomatoes? I like to mash them to a paste and freeze them for pasta sauce. But what I find most fun is canning a dozen jars and savoring them for some fun later.

You might have heard of that custom in Spain during harvest time, where one town has a tomato blast. People get plastered with tons of tomatoes. It looks like a lot of fun.

So if you are a tomato guy like me, keep some jars handy for some good lickin fun on a dreary winter day. It's like wrestling in the mud but redder. I pour the jars onto a plastic sheet on the floor, preferably in the basement and with some friends, have some good clean fun. It does get messy and very sloppy and slippery, but it sure beats freezing your balls off outside.

Before I close, I want to thank those of you who have posted to my last blog. You guys have really made my day. I appreciate all the comments. I felt guilty not posting much in the past two weeks, but with outside work and taking some time off to help my Mom, I just couldn't get near a computer to write. That's all for now. Big hairy muscle hugs.
Posted by buff at 11:21 AM 2 comments: 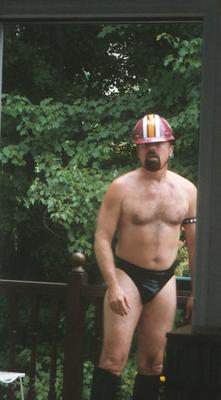 So this is what I've been up to, guys. Been busy working in the woods you see pictured behind me. Sorry for not posting.
Hoping you guys had a woofy and relaxing weekend. Big hairy muscle hugs. More later.
Posted by buff at 7:01 AM 9 comments: