Not Too Early To Think About Daddy Santa's Visit 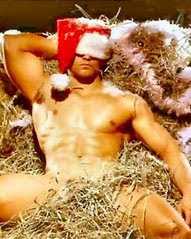 Recently the gay publication, Metro Weekly interviewed the famous filmmaker, writer, producer John Waters, a native of Baltimore, about his feelings towards the Christmas holiday. His humorous observations are listed below.

I do think Daddy Santa is a furry, fuzzy muscle bear. And he's extra generous to all the guys who are naughty but nice during the year. WOOF

Also I thought I'd repost one of my tributes to Daddy Santa from several years ago. Hope you enjoy it.

What's On Your List to Ask Daddy Santa For This Year?
As you can see, this Daddy Santa helper is not one of the brightest bulbs on the light string set, but he's got his heart in the right place, he's hunky, and is ready to make sure you get from Daddy Santa what you have written on his list.For me, walking steady with a cane would make me very happy. Also getting my strength back and being able to lift weights and be able to do stomach crunches and pull ups again, would make feel almost like my previous self once more.You guys have helped me very much so far. I will always remember that.So don't be shy. Daddy Santa isn't a mind reader. But since I've worked with him in the past, I know that he always makes a supreme effort to reward really good and sexy gay boys and men with pleasures that will be welcomed and enjoyed over and over again. Like big hairy muscle hugs, you can never get enough
Posted by buff at 4:51 AM 2 comments: