As many of you know by now, Marc, the Gay Dude, died this past Sunday afternoon.

I am still saddened by his death. He was a wonderful gay man who took time to write and post to so many of our blogs. His insight was remarkable, for such a young guy.

This past week, I finally finished reading "Full Circle" by Michael Thomas Ford. I don't know if Marc had read the novel, but in some ways, certain passages of the book were written with Marc in mind.

Ned has two friends, Andy and Jack. Andy plays an important part in Ned's adult life, meeting up with him at Penn State and they enlist in the Army together, in late 1969 to fight in Vietnam. Jack is Andy's next door neighbor from childhood, the lucky Jack who uses Ned as a comfortable pillow through childhood up to Penn State, where fearing he would flunk out of school and get drafted, enrolls in seminary school until he gets fucked by his professor and is forced to quit.

What comes to mind reading this is gay men are human, perhaps more human than the general population. We may be drama queens at times, but life sometimes just doesn't give us a fair break. Marc suffered from ailments that should not have happened to such a young guy, and unfortunately, he was very unlucky in the health department. He was dealt a bad hand, health wise, and for a long time, made the most of it, and even seemed to lick it.

He gave us hints about his state of health, but for the most part, he never wanted pity or wanted to burden us. He gave and shared, both from his mind and from his heart, everytime he communicated with us through blogging.

Quoting from the book, the passages dealing with love and understanding. " There will always be friendship and love, and between the two of them, there are mysteries to last a life time." We go on trying to figuring them out, but only get a tiny bit closer to the discovery. Something like Pluto, until some body of scientists proclaims that we aren't what we thought we were.

The ending passage of "Full Circle" continues, "Like God and death, the question of what drives the heart may be one we never fully understand.. . "And although some will doubtless be disappointed when no clear answer arises to give them comfort, those who look carefully will find that in the search, in the questioning and wondering and raging, there is beauty beyond reckoning."

I feel that our love and rememberance of Mar is something beautiful. He brightened our minds and our souls. He is still with us, beaming his charm and knowledge in that eternal cyberspace. We love you, Marc. We'll meet again and embrace in big warm hairy muscle hugs of celebration and joy. Until then, your spirit lives on in our blogs.
Posted by buff at 10:44 AM 4 comments:

Oddities in the NewsThis Week, with a gay slant

Here's one from New Zealand. Might this be a trend?

In part, the change is to distinguish the club from Family Bar upstairs, which is hands in the air camp, loud, cheesy, with drag shows and karaoke, says Ribena, and partly to ditch the old hat stereotypical G.A.Y. logo, which has been a gay club in London for, like 100 years.

Some people refuse to go to G.A.Y. because of its name, says Ribena, and the music is often the same downstairs as it is upstairs [in Family].

Supermarket will attract the shirts-off Les Mills muscle boy set, wholike to look at themselves in the mirror, she adds.

The change will come into effect this coming Saturday.

© 2006 Copyright GayNZ.com
I guess all muscle boys, the world over, love to look at themselves. Such is gay life.

Now for me, enjoying life is getting my mouth to savor the juices of a firm, ripe, tomato.
Posted by buff at 8:16 AM 2 comments:

I Beg to Disagree 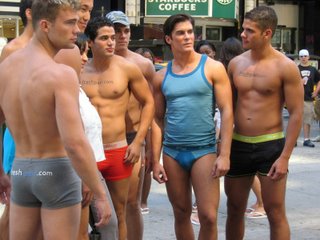 The following are excerpts from an article found in this weeks Washington Blade.

Joe Kort is a gay social worker and therapist who wrote “Ten Smart Things Gay Men Can Do to Find Real Love.” Michael Alvear, writes the gay male sex advice column “Need Wood? I have on occasion, not agreed with our "Woody" concerning some of his views.

“After five years together, most gay couples have open relationships,” Kort says. “I think it serves two functions. Number one, it helps gay men find partners. It’s how they look for partners and I also think it keeps relationships together so that these gay male couples who are non-monogamous and cruise, they have emotional fidelity, but they have sexual openness.

“The other reason that it works is that every couple has a sexual desire discrepancy. In gay couples, the one that wants it more can go get it. It relieves the pressure in their relationship in that area. It’s the truth and I can’t hide from it. But I do believe this — you open your relationship up for more problems when you’re not monogamous.”

Michael Alvear, however, says that his observations have led him to conclude that younger gay men are pursuing monogamous relationships.

“I can almost tell you with 90 percent accuracy that whenever I get a letter from somebody who is longing for monogamy or is upset at seeing couples who have open relationships, it’s inevitably somebody younger, someone in their 20s,” Alvear says. “It’s a sort of retro gay, a turn to traditional values and relationships in guys in their 20s.”

Joe Kort says that sex in public can be problematic.

“It’s rude because you’re using a public space for something it wasn’t designed for,” Michael Alvear says. “How would George Michael like it if people starting having sex in the middle of one of his concerts and started driving away people who came in for what that stage was designed for, a concert? How would people at the baths feel if IBM conducted a business meeting in the middle of the place? There’s a time and place for everything.”

Other expert on the subject, Rob Weiss declines to give his opinion on public sex, but points out that its illegality means participants must accept personal responsibility if they are caught.

Rob Weiss, a gay social worker and therapist, says he considers anonymous sex to be more an issue of gender than sexual orientation.

“It’s not up to me whether to say the laws are right or wrong, but they are,” Weiss says. “So to put yourself in the situation of getting arrested and then turn around and say ‘I’m harassed,’ I have trouble with that.”

“When recreational behavior can be identified as an addiction is when it’s having serious consequences to the life of the person that’s doing it,” Weiss says.

The consequences can include betrayal of a relationship, loss of career or job, acquisition of disease, violation of personal belief or value or some form of public humiliation, such as an arrest.

“The people I see in my experience are people who have consequences because of their behavior and can’t seem to stop,” says Weiss, who has been treating people with sex addictions for 12 years. “These guys are acting out sexually … because of the arousal that goes on. Not genital arousal, but the endorphins, out of the chase, the possibilities. It’s not so much about the sex or the orgasm.”

Weiss and Kort say they lack statistics on the matter, but suspect that a majority of gay men have experienced sexual addiction. Weiss says that his treatment clinic, the Sexual Recovery Institute in Los Angeles, sees about an average of 150 men a week.

First of all, I am really glad to read that younger gay men are seeking monogamous gay relationships at least, initially.

What I find hard to believe that there exists this vast sea of gay couples constantly screwing around outside their relationships. How emotionally draining can this be? What about faithfulness and love, both sexually and emotional? You can't always have your cake and eat it too without being a really fat pig. And on top of all of this, we want to be able to marry so we can emulate unfaithful straight couples. If this is the widespread opinion of the gay male community, then maybe gay marriage isn't worth the struggle.

On a lighter note, the photo spread above is a belated celebration of National Underwear Day. How I'd like to pat each and every one of your cute butts in celebration. Enjoy.
Posted by buff at 6:24 AM 14 comments:

Under Sweltering Temperatures, Our Resident Gay Pundit (In His Dreams), Andrew Sullivan, Cracks. 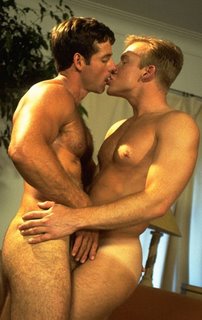 Old Andy this past week, just can't seem to get his rocks off enough. He has entered a very lively debate raging on over cable and blog world about gay male promiscuity. He contends that gay men are inherently more promiscuous than straight people.

He basis his theory on the fact they, like Bill Clinton (oh, it always has to be political with our buddy, Andy) gay men are full of testosterone, and, like Bill Clinton, they can get sex when they want it. Sounds like we can just turn on the charm and the spigot, and instantly, we are romping with any guy we want. I wish.

Because we have bathhouses, public sex, backrooms and such, we have the resources to get laid 24/7. I guess the piers of New York are teaming this weekend with guys fucking each others brains out. Just because Andy Sullivan says so.

So are we all as promiscous as Andy tends to believe we are? Love to have you guys post your comments. I'm going to now take a very cold shower. Anyone want to join me? Big hairy muscle hugs.
Posted by buff at 6:56 AM 17 comments: